An awesome experience, with amazing people

My name is Anthony Tran. For those who don't much about me, I am a exchange student at Osaka University. I come from University of California, San Diego (UCSD) as a Mechanical Engineer. I've been involved with FSAE at UCSD for the past three years, so when I came to Osaka University, I wanted to continue my involvement with FSAE. This is when I mustered the courage to message OFRAC, despite my lack of knowledge of the Japanese language. Mitsuhashi-san promptly responded to my email kindly in English (thank you very much for that). I attended the first meeting and was kindly introduced to everyone. The meeting was in Japanese, so I definitely didn't understand anything . I tried my best with Google Translate to understand the Meeting Minutes, but as we all know, Google can be a little dumb at times. Ikeda-san then showed me the team's garage or rather he called it his "home." This is a feeling that I definitely could associate with and had a good laugh.

From there on, I attended as many subsequent meetings as possible. Ishida-san was a kind soul and tried his best to explain and assign tasks to me. Often times, it was difficult to convey his mind, but every time, he tried his best and did not give up trying to explain his thoughts. But this isn't just Ishida-san, it is everyone! English is a difficult language, but I know everyone tried their best to talk to me. This is something I really appreciate as I'm sure if I've been to any other team they might've given up on me as I would've been a nuisance to their productivity. The language barrier was great, but despite that, I know everyone tried their best to try to include me in the team. For that, I am very thankful for everyone's efforts.

I really got to experience the Japanese culture when the team invited me to go to Bonenkai with them, a year end party. It was my first time eating Yakiniku, and it was very delicious.Better yet, it was tabehodai (all you can eat), which was a definite plus! Again thank you for inviting me to experience a glimpse of Japanese culture.

It is a weird phenomenon, but I have noticed it many times in other situations. Despite everyone knowing about my last day at OFRAC, I felt that on this day, I got closer with many of the team members. It's quite a sad moment when you finally feel like you're part of something amazing and spending time with awesome people, only to realize that your time is running out very quickly. I really wish that I could extend my time here, because I know there would be many more great moment I would have with everyone.

On my last day at OFRAC, I got a kind gift from the team, and especially Ishida-san because I think it belong to him. It was a team sweater! Now that really was a special moment, to be considered as part of the team. Again, thank you everyone! I really can't stop saying how thankful I am for everything! 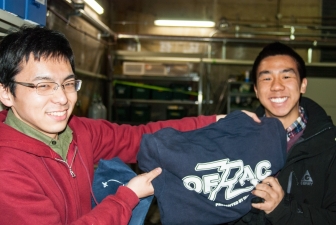 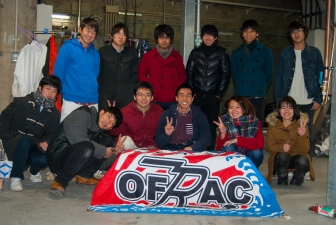 Alright now taking a chance with my Japanese I learned in my Nihongo Class...
みなさん、チームの一員として受け入れてくれて、ありがとう（ございました）。よい経験ができました。ありがとうございます。

Also, if anyone comes to Los Angeles or San Diego, let me know! I'll be more than happy to show you around the area! Feel free to add me on Facebook, or follow me on instagram @tranthonylai, I'd love to keep in touch with everyone!